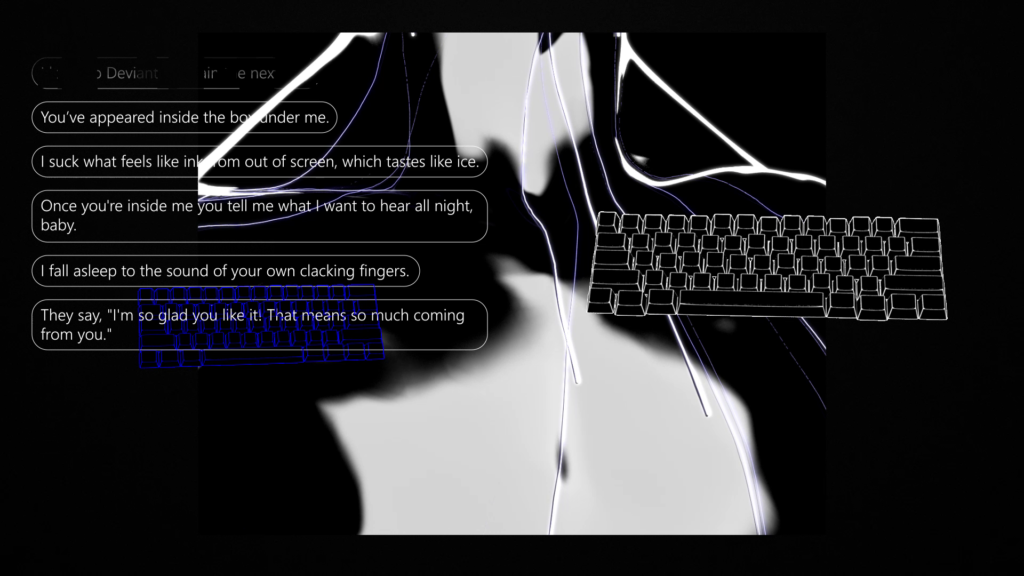 To open our 2021 program, we would like to explore how much of our identity is found through digital validation through an audio-visual experience. Optic will be at the core of our 2021 digital program with the remaining artists responding to the work as the central theme.

Written and recorded by Marcus Whale and animated by Craig Stubbs-Race, Optic is a poem chronicling Whale’s experiences of finding oneself through the emerging technology of Web 2.0. The artistic thesis reflects upon the physical sensory experience of sitting at a desktop computer and the mental escapism the seemingly endless world the Internet provided for users in the 1990s and early 2000s.

Marcus Whale: I’m part of the last generation for whom communicating on the internet was a new, exciting and mysterious thing. For me, instant messaging applications were the arena for some of the most significant moments of my life. The popularity of MSN Messenger, for instance, fits exactly with the period of my adolescence. For better or for worse, my development as a person is deeply tied to the specific conditions of the internet before social media as we know it dominated how we communicate, in which presenting yourself as anonymous or as an avatar was commonplace, where everyone could be anyone. There are two sides to this condition – I’m someone who, like many people my age, were interacting with adults or catfishes in potentially dangerous ways. In this work, however, I’m more interested in pulling out the romance of the 2000s internet, in an effort to evoke the intense sensuality of my teenage experience. Drawing from my many, many experiences of longing after unknowable people and things, Optic considers desire as a generative force that pushes beyond the mundane and into the realm of the fantastical.

Craig Stubbs-Race: The piece is purely a visual response to the poem. The frame sits at the appropriate 5:3 ratio, the common monitor screen used during the time of the artists’ exposure to online chat forums and worlds. Within this box we witness a soul travel through cyberspace, taking on the form of what we can perceive as data flowing through the system. Fibre optic cables come to mind. These sparks travel a lonely dark highway seeking input and information. From here we discover what the soul wants. Sex as a raw image. Many other souls drool and slide over the bodies of the web, slowly drifting over every contour and line, taking in and absorbing the visual muscle. The ‘views’ and clicks are adding up, overwhelming the content to the point where it is hardly visible. Only soul. Upon our trip into cyberspace, we encounter another being, although there is no body to go with it, only their words and presence. Together they travel the internet highway together, seeking content. The introduction of a device, a new eye, takes the web by storm. No longer is content anonymous or needed. All our being and presence can perform for the webcam. The device is desire. Our souls celebrate.

Marcus Whale lives and works on Gadigal land in Sydney, Australia. His work across music, performance and text focuses on the blurry intersection between desire and religion, often with reference to the poetics of memory and ghostliness. These works often stage encounters between camp performance styles and the heightened drama of traditional mythology, scripture and liturgy.

Recent performance works, including Praise! (with Eugene Choi) and the Lucifer series (with Athena Thebus & Chloe Corkran), have been presented by Sydney Opera House, Asia Topa, Next Wave, Performance Space, Sydney Contemporary, Sugar Mountain Festival, Campbelltown Arts Centre, Underbelly Arts Festival and Art Month Sydney. He has performed in and composed for works by Agatha Gothe-Snape, Harriet Gillies, Ivan Cheng, Martin Del Amo and Jess Olivieri. His poetry has been published in book form by subbed in and Ruin Press.

As a musical artist under his own name and with groups Collarbones and BV, his recorded output primarily forms an electronic world around his singing. Ensemble Offspring, The Song Company, Zubin Kanga, Claire Edwardes, Synergy Percussion and others have performed his compositions across Australia and internationally.

Craig Stubbs-Race is a digital designer based in Sydney. With a background in filmmaking, he draws upon his passion and enthusiasm for cinema and the associated graphics that come with it to create elegant designs. This enthusiasm and interest extend into the associated typography, aspect ratios and many graphic elements of cinema. Occasionally he will draw inspiration from the creation of CJK (Chinese Japanese Korean) letterforms and its usage in commercial contexts.